Most of the world stands against Israel. Historically, that has been the usual state of affairs between Jews and the rest of the world. In that august body called the United Nations, if you ask a majority of its members they will say that Israel’s building of homes (which they call derisively “settlements”) in the West Bank is completely illegal. Why is it illegal, you ask? The answer will be that it is illegal because a majority of members of the U.N.say it is.
END_OF_DOCUMENT_TOKEN_TO_BE_REPLACED

At Israeli Apartheid Week, campus haters claim to be fighting “colonialism” by fighting Jews. Columbia University’s Center for Palestine Studies, dedicated to a country that doesn’t exist and which has produced nothing worth studying except terrorism, features diatribes such as Palestine Re-Covered: Reading a Settler Colonial Landscape”. This word salad is a toxic stew of historical revisionism being used to justify the Muslim settler colonization of the indigenous Jewish population.
END_OF_DOCUMENT_TOKEN_TO_BE_REPLACED

The University of California, Los Angeles Graduate Student Association approved a resolution Wednesday calling those who do not support a pro-Palestine agenda “Islamophobic.”
END_OF_DOCUMENT_TOKEN_TO_BE_REPLACED 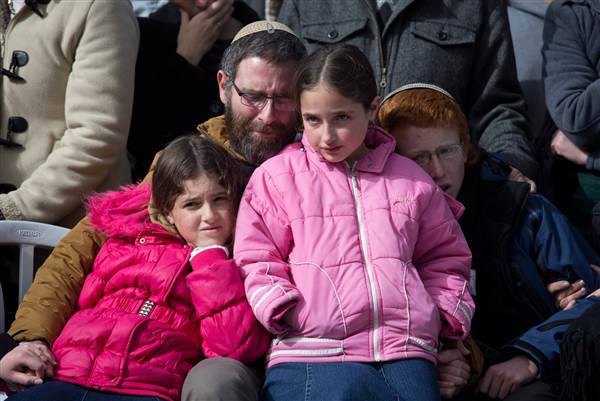 A Palestinian has been arrested by Israeli security forces overnight Monday for the murder of Dafna Meir in her home on Sunday evening, The Times of Israel reported.

The suspect was identified as 16-year-old Morad Bader Abdullah Adais from the village of Beit Amra, located nearly 2 miles from the West Bank community of Otniel where Meir was killed. Residents of Beit Amra informed Israeli authorities of Adais’ presence in the village, allowing him to be arrested without incident, according to Israel’s Channel 10.

END_OF_DOCUMENT_TOKEN_TO_BE_REPLACED

This is why there can be no peace between Israel and the Palestinian Arabs.  Until the Arabs stop this horrific child abuse and stop teaching their children that blowing up Jews is beautiful from the time they are born there will never be a peaceful solution.

Palestinian children: Martyrdom for Allah is preferable to life and suicide terror is natural.

Presenter: You described Shahada as something beautiful. Do you think it is beautiful?
Walla, age 11: Shahada [Martyrdom] is a very, very beautiful thing. Everyone yearns for Shahada. What could be sweeter than going to paradise?
Presenter: What is better, peace and full rights for the Palestinian people, or Shahada?
Walla: Shahada. I will achieve my rights after becoming a Shahid [Martyr].
Presenter: OK, Yussra, would you agree with that?
Yussra, age 11: Of course; Shahada is sweet. We don’t want this world, we want the Afterlife. We benefit not from this life, but from the Afterlife.
Presenter: Do you actually love death?
Yussra: Death is not Shahada.
Presenter: No, I mean the absence after death.
Yussra: No child loves death. The children of Palestine adopted the concept that Shahada is very good. Every Palestinian child, say someone aged 12, says: O Lord, I would like to become a Shahid.
Presenter: We’ve got a call, Sabrine from Ramallah.
Sabrine [telephone]: Ayyat al-Akhras was 17 when she blew herself up –
Presenter: Sabrine, are you for it or against it?
Sabrine [by telephone]: Of course I support blowing up, it is our right.
Presenter: Sabrine, now, is it natural that Ayyat al-Akhras blows herself up?
Sabrine: Of course it’s natural.

The following is going to take place tomorrow (Tuesday, 12/30) across the country:

The ANSWER Coalition, Muslim American Society Freedom, Free Palestine Alliance, National Council of Arab Americans, and Al-Awda, International Palestine Right to Return Coalition are calling for Tuesday, December 30 to be a National Day of Action to show solidarity with the Palestinian people in Gaza and to demand an immediate end to the murderous attacks carried out by the Israeli military against the people of Gaza.

In Los Angeles, this group of communist-backed organizations is going to protest at the Israeli consulate, 6380 Wilshire Blvd. at 4:30pm. For those of you who are not in Los Angeles, you can go to the ANSWER web site: http://tinyurl.com/9jw89j and find out where they are protesting in your town.

I would like to have a turnout of supporters of Israel to counter-protest the anti-Israel protesters. We can’t let ANSWER and the anti-Israel Islamic groups be the only ones out there demonstrating. We should show that there are many of us who support Israel, which has been under consistent missile attack from Gaza for months.

Those of you in Los Angeles, I am encouraging you to please come to 6380 Wilshire Blvd. tomorrow between 3:30pm and 4:00pm to support Israel. Bring American flags and Israeli flags.

James Woolsey, former Director of the CIA, in an interview with Israel National Radio, has spoken a blunt truth.

Asked his opinion on the establishment of a Palestinian state, the former CIA director recommended that it not happen in the coming decades. He said that though the Jewish presence in this region precedes the Moslem claim – “for some Muslims like Arafat to deny that Jews were ever present here is idiotic” – the Moslems also have national rights in the area.

Openly avoiding the question of the nature or borders of a Palestinian state, he emphasized his opinion that “the Palestinians should not be granted the right to statehood until they start to treat Israeli Jews who settle in the West Bank as fairly as Israel treats its Muslim citizens.”

“An Arab Muslim living in Jaffa,” Woolsey said, “enjoys freedom of speech, religion, and expression, and can vote for his representatives in the Knesset, and doesn’t go to sleep worrying that some government element might come and kill him. I think that once the Palestinians start treating Jewish settlers with that same degree of humanity – and they’re very, very far from doing that now – at that point I think we have to seriously consider how they could have some degree of self-governing. I won’t get into the question of borders, but what I think is that the Palestinians must be held to the same standards as Israel regarding how they treat the other. I am sure this will be many decades from now, though, because their children are taught the Wahhabi doctrine of being suicide bombers and the like.”

Woolsey also says, of involving Syria and Iran in discussion about the Middle East:

Traiman: “There are continuous calls for American troop withdrawals from Iraq; the unilateral withdrawal idea is back on the table here in Israel; and talks with Syria are again being pushed. Why are we playing the appeasement card?”Woolsey: “Appeasement isn’t called playing a card – it’s just folding. I think those steps that you just mentioned are most unwise. Talking to Syria and negotiating should be done only when one has leverage… Unilateral withdrawal from the West Bank would not be a wise step for Israel to take; when one sees what happened in Gaza, and sees the political advantage that Hamas has taken of the situation to claim unilateral victory and now to be part of the PA government – how many failures do you need before you recognize that it’s a failure?”

I hope the Olmert Government is listening to Director Woolsey.

I also wonder why the Senate is not listening to former CIA Director Woolsey as they proceed to issue a Resolution, even though non-binding, that will give comfort and hope to our enemy while our troops are in harms way. A despicable act, in my view.

In a separate interview, James Woolsey says that

But former CIA director James Woolsey said this week the U.S. should learn from past experience. Until something changes in the P.A. there would not be an Israeli-Palestinian deal, he said.

Wafa al-Bis, a 21 year old Palestinian girl who, it turns out, belongs to the al-Aqsa Martyrs Brigade, was arrested carrying explosives in her pants at the Erez Crossing checkpoint in Gaza.

Wafa had received a border pass as a humanitarian gesture so that she could cross into Israel where she was being treated at a Beer Sheva hospital for burns she had received in a cooking accident. She admitted she had the explosives so that she could blow up the hospital (and all the patients, doctors and nurses) that had helped her.

On Israeli TV Wafa said she had dreamed of being a suicide bomber since she was a child and considers it an honor and a duty to Islam.

According to Israel Insider,

“Israeli officials said Bis, who comes from Jabaliya in Gaza, was burnt in a cooking accident five months ago, and had received treatment on humanitarian grounds in the Beersheba hospital.

They said she was making another trip for follow-up treatment on Monday, but planned to blow herself up instead.

The bombing attempt was only the latest in a series of terrorist attacks involving the exploitation of Israel’s humanitarian flexibility in the face of a very real security threat.

Monday’s abortive suicide attack at the Erez crossing is especially shocking for the Israeli public for a number of reasons:

To begin with, the female bomber was entering Israel using a special medical permit issue in order to provide her with follow-up treatment for burns sustained five months earlier in a home cooking accident. At that time, the woman’s life had been saved by the same Israeli doctors and nurses who she was now planning to blow up.

Despite this difficult reality, many human rights groups are only too quick to criticize Israeli security procedures at checkpoints, such as its insistence on inspecting ambulances.

The attempted attack by a woman terrorist from Gaza illustrates again, in the most appalling terms, the terrorist organizations’ cynical exploitation of the weaker elements of Palestinian society, such as women and children.

Israel had passed on specific intelligence to the PA concerning the terrorists’ intentions of dispatching this bomber. However the PA did nothing to prevent the attack. This further demonstrates to Israelis the inability or unwillingness of the PA to prevent terrorism and dismantle terror infrastructures as it has repeatedly and publicly committed itself to do, both to Israel and the international community.

Anyone who thinks that peace is at hand between the Palestinians and Israelis does not have a grasp of what is going on in the Middle East. Even now, small children in the Palestinian territories are still being taught that the highest honor they can achieve is to commit suicide while blowing up innocent Israeli civilians – men, women and children. As long as the Palestinians continue to radicalize their children Israel will not be safe. I predict that as soon as Israel departs from the Gaza in August, the Palestinians will launch a major terrorist offensive against Israel.

If Sharon really thinks that Mahmoud Abbas is capable of controlling Hamas or Islamic Jihad, and that there will be peace with the Palestinians, he is leading Israel into dangerous waters.