THE OBAMA NARRATIVE GOES TO HIROSHIMA 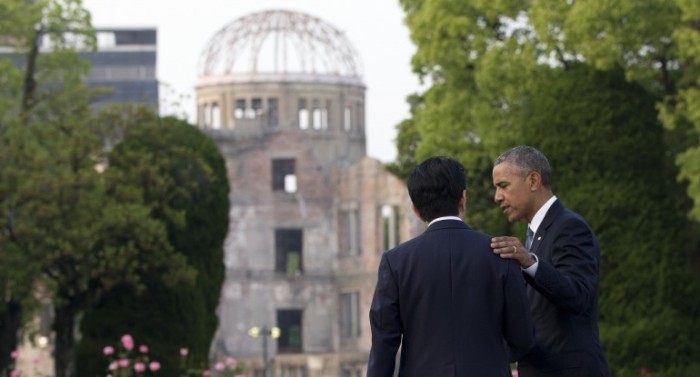 U.S. President Barack Obama and Japanese Prime Minister Shinzo Abe speak with the Atomic Bomb Dome seen [at rear] at the Hiroshima Peace Memorial Park in Hiroshima, western Japan, Friday, May 27, 2016. Obama on Friday became the first sitting U.S. president to visit the site of the world’s first atomic bomb attack, bringing global attention both to survivors and to his unfulfilled vision of a world without nuclear weapons. (AP Photo/Carolyn Kaster)

This past Friday, President Obama became the first sitting American president to visit Hiroshima. There, in that solemn setting, he delivered a speech so grandiose, so full of sophistries, so stuffed with America-denigrating baloney, that, on those grounds alone, it ought to qualify as historic — except, in essence, he’s said it all before. I don’t know if White House Boy Wonder Ben Rhodes wrote this particular riff on The Narrative. But if he did not, we may safely assume that Obama has found another speechwriter who is a perfect replica.

No, Obama did not explicitly apologize for America’s dropping of the atomic bomb. Rather, he worked around to it by implication, stripping the act of almost all historical context, lumping together all civilizations and nations, and all wars — whatever the reasons — in one big stew, and urging, as his solution for the planet (imperfect America included), a “moral revolution” of which he evidently considers himself the prophet.

How humanity might achieve this moral revolution, Obama did not clarify. (I doubt that Moscow, Beijing, Tehran or Pyongyang were chastened by Obama’s urging that “we must reimagine our connection to one another as members of one human race.”). Neither did he mention that in the 71 years since America used atomic bombs to end World War II, it has never used them again, and with America standing as guardian of the free world, neither has anyone else — though with Obama’s shrinking of the American military, apology tours for America’s past, snubbing of America’s allies and favors to America’s enemies, the chances of nuclear war are again on the rise.

In his Hiroshima speech, Obama skipped right past such matters as why America entered and fought World War II, what it meant or why it made a difference who won. He made no mention of Pearl Harbor, or the agonizing decisions of his predecessors, or the blood and sacrifice of a generation of Americans who fought for freedom against Nazi fascism and for liberty against the onslaught of Japanese imperial conquest. He said nothing about the colossal benefits that an American-led victory delivered to the world.

Instead, Obama began his speech by conjuring a cosmos in which, out of a blue sky, the bomb dropped itself:

Seventy-one years ago, on a bright, cloudless morning, death fell from the sky and the world was changed. A flash of light and a wall of fire destroyed a city and demonstrated that mankind possesses the means to destroy itself.

The context of World War II, he dismissed as a distraction: “It is not the fact of war that sets Hiroshima apart.” For Obama — as he told us — his visit to Hiroshima was about the weapon and its “capacity for unmatched destruction”:

Why do we come to this place, to Hiroshima? We come to ponder a terrible force unleashed in a not so distant past.

As Obama frames the tale, Japan’s Dec. 7, 1941 surprise attack on Pearl Harbor disappears from the picture. So does the Rape of Nanking, the alliance with Nazi Germany, the Bataan Death March; so do the battles of Saipan, Leyte, Iwo Jima, Okinawa, and the hideous toll that would surely have come with a land invasion, had the atomic bombings of Hiroshima and Nagasaki not led within days to Japan’s surrender. We are left to infer — Obama invites all mankind to believe — that none of these specifics are really relevant to Hiroshima.

In this alternate universe, we can forget Presidents Franklin D. Roosevelt and Harry Truman, who led America to victory in a Second World War that America did not seek. Never mind that America dropped the atomic bomb on Hiroshima, and, three days later, on Nagasaki, not to start a war with Japan, but to end it.
On Obama’s clock — as he made clear at Hiroshima — it is not Pearl Harbor, but August 6, 1945, the day the first bomb was dropped (by America), that is the real date which will live in infamy. Unless, of course, (there is always a twist to Obama’s rhetoric) the human race takes his advice to be inspired to moral perfection by the horror of Hiroshima.

Here, in considering what Obama went on to say, I must digress for a moment to talk about his art of the “narrative.” Obama’s speeches are slippery to summarize because he often says a number of things with which one can agree (World War II brought terrible suffering; nuclear weapons could destroy us), but he mixes these together with false premises, groundless conclusions, oddly disembodied snippets of history and shyster prescriptions.

Out of this moral, intellectual and historical jello comes his real message, a refrain of moral equivalence between America and its foes. This is topped off with his Messianic “messaging,” the gist of that being that if American power is reduced, and replaced with the favor of his own extended hand — Iran, Cuba  —  then the human race will be finally on its way to perfection, rising in unison toward world peace.

Obama has been peddling this elixir for years. It was the theme of his 2008 non-campaign/presidential-campaign speech in Berlin, where, as he described it: “a wall came down, a continent came together, and history proved that there is no challenge too great for a world that stands as one.”

That might sound way cool. Except, one of Obama’s prime rhetorical tools, here on full display, is the logical fallacy. The entire premise of his statement was false. The Berlin Wall did not come down because the world stood as one. The wall came down because America, with its nuclear arsenal, stood for decades against the global communist ambitions of the repressive, ruinous — and by 1949 nuclear-armed — Soviet Union and its satellite empire. During that span, tens of thousands of Americans died fighting on the front lines of what the Soviets considered their own moral revolution, in places such as Korea and Vietnam.

Getting back to Obama’s nuclear tutorial at Hiroshima. If an American president feels compelled to go there, then in theory it should be quite possible for him to mourn the dead, deplore war, warn about nuclear weapons and lament the core contradictions of humanity (so brilliant at building, so prone to destruction) — while also driving home that there are some threats that a free society must arm itself to deter and some wars which, in order to survive, it must, and will, fight to win. That would be a useful message to send the bosses in such places as nuclear-equipped Moscow, Beijing, and Pyongyang, or Tehran, now testing ballistic missiles for what Obama assures us is its “exclusively peaceful” nuclear program.

But deterrence and defense of America do not fit comfortably into Obama’s narrative. Having mourned, deplored, warned, lamented and called for the elimination of all nuclear weapons, and preferably an end to war itself, he was left with the problem of explaining the continuing existence of America’s nuclear arsenal. He dealt with that by first conceding, reasonably enough:

We may not be able to eliminate man’s capacity to do evil, so nations — and the alliances that we’ve formed — must possess the means to defend themselves.

In the next sentence, however, he effectively reversed himself, implying that America’s nuclear arsenal is less a defense than a result of cowardice. Collective cowardice seems to be what he means, but he only names one nation, “my own”:

But among those nations like my own that hold nuclear stockpiles, we must have the courage to escape the logic of fear, and pursue a world without them.

I would wager that Russia’s President Vladimir Putin, China’s President Xi Jinping and the rest of the currently resurgent collection of despots worldwide would be delighted to see America go first in escaping this “logic of fear.”

What’s missing from Obama’s “logic” is the reality that mankind — no matter what Obama says at Hiroshima — is unlikely to un-invent nuclear weapons. The practical question is how to minimize the chances that they will be used, and the main question for an American president should be how to ensure they are not used against the U.S. and its allies. It matters whether it is Britain that has the bomb, or North Korea.

But in the Obama Narrative, the distinctions among nations, causes, tyranny and freedom — all those niceties that shape events in the real world — are secondary to his summons to all humanity to rise as one. At Hiroshima, he repackaged World War II as a conflict in which all were to blame — America, Japan, whatever:

The World War that reached its brutal end in Hiroshima and Nagasaki was fought among the wealthiest and most powerful of nations… Their thinkers had advanced ideas of justice, harmony and truth. And yet, the war grew out of the same base instinct for domination or conquest that had caused conflicts among the simplest tribes.

His speech goes on for a weirdly interminable 16 minutes or so, crammed with further fallacies, most of them giving short shrift to America. (Which he describes, as usual, as having nice ideals, which, in its imperfection, it does not live up to).

He mentions as if it happened in a vacuum after Hiroshima’s “fateful day,” that Japan and the U.S. “made choices that give us hope.” Actually, having chosen to surrender, Japan had to wait quite a while before making any more choices. From 1945-1952, the Japanese lived under Allied occupation, led by U.S. General Douglas A. MacArthur, who imposed a series of reforms, including a new constitution. From that bout of U.S. domination, Japan emerged to become a thriving modern democracy, a respected power and one of America’s strongest allies.

Similarly, in World War II’s European theater, Obama’s story is that “oppressed peoples and nations won liberation.” Actually, valiant though the resistance groups of World War II were, the oppressed peoples did not win liberation. They were liberated by the victorious military forces of the Allied Powers, at immense cost. Nor were all liberations equal. The lucky peoples and nations were liberated by America and Britain. For the people of Eastern Europe, unlucky enough to be “liberated” by Stalin’s Soviet Union, there was no freedom until, more than two generations later, America won the Cold War.

Obama ended his speech by calling on the world to choose a future “in which Hiroshima and Nagasaki are known not as the dawn of atomic warfare, but as the start of our own moral awakening.”

That’s a neat rhetorical flourish, a dollop of whipped cream on the narrative jello. It’s also an apology for America. It resets the world’s clock to Obama-time; implying that Truman was morally asleep when, as this narrative has it, out of the blue sky he ordered the bombing of Hiroshima. As one more slap at America from America’s own president, it is far more likely to embolden America’s enemies than to discourage the spread of nuclear weapons.

To remind the world of the horror of nuclear weapons is no bad thing. To seek ways to reduce the chances they will ever be used again is a fine imperative. But if on such a mission an American president wants to call for a moral awakening of the world, he would be better advised to do it from the Memorial of the USS Arizona, in Pearl Harbor, tomb to this day of more than 1,100 of its 1,177 crewmen, who were among the 2,403 Americans killed in the surprise attack that brought America into World War II, and led to Hiroshima.