WHAT IS A PASSOVER SEDER?

For those of you who have heard about Passover and wonder what a Passover Seder is, here is a crash course for you.  Thanks to UnitedWithIsrael.org and Rabbi Ari Enkin.

In this piece, Rabbi Ari Enkin gives a crash course on the Seder rituals and the basic meaning behind each of them. Of course, he encourages further discussion at the table in order to delve more deeply into the significance of the evening.

The Passover Seder is the annual ritual meal that takes place on the first night of Passover. The Seder is usually conducted among family, including grandparents and even great-grandparents if possible!

The evening (and meal!) centers on the story of the liberation of the Jewish people from slavery in Egypt. The Seder table is traditionally set with the finest place settings and silverware, and family members come to the table dressed in their best holiday clothes. Many families have the custom that the individual leading the Seder wear a white robe, called a kittel.

It is a Torah requirement to hold a Passover Seder, as it says, “You shall tell your child on that day, saying, ‘It is because of what the Lord did for me when I came out of Egypt.’” (Exodus 13:8)

The Passover Seder plate, called a ke’ara, is a special dish containing six symbolic foods used during the course of the Seder. 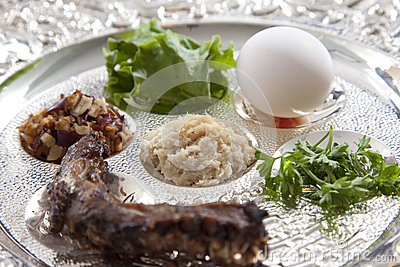 Each of these foods has special significance to the story of the Exodus from Egypt. The six symbolic foods on the ke’ara are:

Maror and Chazeret: Two types of bitter herbs, symbolizing the bitterness and harshness of the slavery that the Jews endured in Egypt. For maror, many people use freshly grated horseradish or whole horseradish root. Chazeret is typically romaine lettuce, whose roots are bitter-tasting.

Charoset: A sweet, brown, pebbly paste of fruits and nuts, representing the mortar used by the Jewish slaves to build the storehouses of Egypt.

Karpas: A vegetable other than bitter herbs, usually parsley, but sometimes something such as celery or cooked potato, which is dipped into salt water.

Zero’ah: A roasted lamb, goat or even chicken bone, symbolizing the Korban Pesach, the Passover sacrifice.

Beitzah: A hard-boiled egg, symbolizing the Korban Chagigah, the festival sacrifice that was offered in the Temple in Jerusalem and eaten as part of the meal on the Seder night along with the Passover sacrifice.

The seventh symbolic item used during the meal—a stack of three matzot—is placed on its own plate on the Seder table.

15 Steps in the Seder

There are 15 steps, or “stations,” in the Passover Seder.

The first station is the “Kadesh” which opens the evening with the “Kiddush,” just as is done on every Shabbat and holiday evening. Kiddush should be recited as soon as the synagogue services are over but not before nightfall. The Kiddush is traditionally recited by the father of the house, but all Seder participants may participate by reciting the Kiddush themselves.

We then wash our hands (“Urchatz”) in preparation for dipping a vegetable in salt water. This is because according to Jewish law, whenever we dip fruits or vegetables into liquid, we must wash our hands. Although this is no longer practiced, the ancient custom is maintained at the Passover Seder. No blessing is recited at this point in the Seder.

Breaking the matzah in half for the “afikoman.”

Then comes Karpas, where we dip a vegetable into salt water to remind us of the tears shed by our enslaved ancestors.

As mentioned, there are three matzot  stacked on the Seder table. We now break the middle matzah in half (Yachatz). The larger piece is hidden, to be used later as the afikoman, the “dessert,” after the meal. The smaller piece is returned to its place between the other two matzot. Most families have the custom to play some kind of hide-and-seek game with the children to find the hidden afikoman.

Next is Rachtza, when we wash our hands again and recite the blessing as is done before eating bread every single day of the year. We immediately proceed toMotzi and Matzah, when we say the blessing over bread and eat the matzah. This may very well be the biggest mitzvah (commandment) of the evening. We then eat the bitter herbs (Maror) to remember the bitter slavery of Egypt.

Now a sandwich (Korech) is made with both matzah and bitter herbs. And then….the festive meal is eaten (Shulchan Oreich)! Dig in! At the end of the meal we eat the Afikoman (Tzafun) and the recite the grace after meals (Barech). Festive prayers are then recited (Hallel).

The Seder is then concluded (Nirtzah) with a prayer that God accept our Seder service favorably, and we then declare: “Next Year in Jerusalem!” Most people supplement their Seder with traditional songs that discuss the theme of redemption.

The holiday is about the story of the Jews going from slavery to freedom. It is also about, in modern times, the aspiration of freedom for all.

GA Note: The description above is the description for a Passover Seder held by Jews whose origins and customs are from Europe (Ashkenazi Jews). Sephardic Jews (Those whose origins and customs are from Spain) and Mizrahi Jews (from the Middle East and Central Asia), which I am, have different customs, and different foods, but the ritual is the same, and the book, the Haggadah, is the same.