Which Are Death Spiral States?

William Baldwin writes in Forbes that if your state has more takers than makers, you are in a death spiral state.

Does your state have more takers than makers? Check it out.

Add up the numbers. There are 114 clients drawing from the government for every 100 people chipping in by working outside the government and paying taxes. We’re calling this the Feedme Ratio. Six states have a number over 100.

These states are at risk of going into a downward spiral in the next recession. The burdens will remain but too many of the providers—employers in the private sector—might shrink or decamp. Why add jobs in a state that asks each productive worker to carry not just his or her own weight but also the weight of one other person? 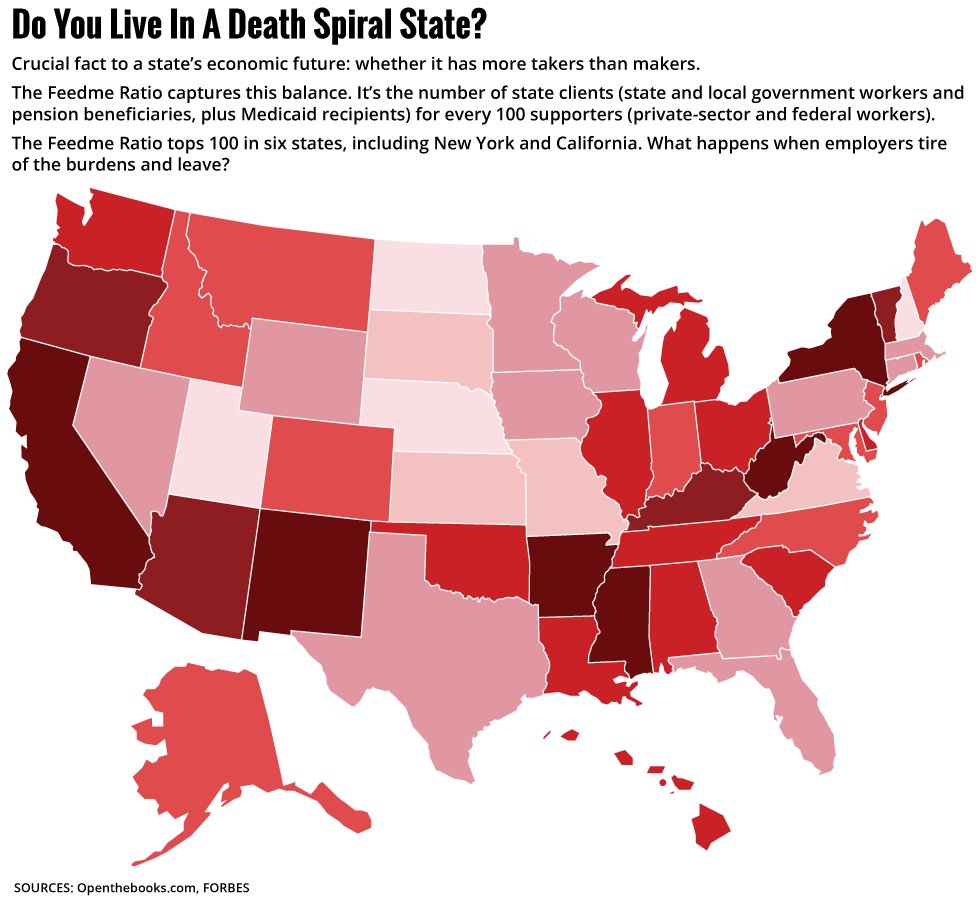 The author goes on to explain the dangers of living or working in a death spiral state.

New York is on the list of at-risk states, with a Feedme Ratio of 108. New Mexico is in the worst shape, with 143 government clients for every 100 private-sector workers.

The three other states with Feedme Ratios over 100: West Virginia at 116, Mississippi at 111 and Arkansas at 103. You can check your state on this map.

The hazard with overburdened states is that the departure of jobs could someday turn into a rout. Just this is happening in Puerto Rico. Its productive citizens are leaving for the mainland. They are sticking a dwindling population of private-sector workers with the burdens of supporting the government’s clients and paying off the government’s debt.

Sunny, silicon-rich California is a long way from Puerto Rico’s fate, but the costs of keeping the government fed are on an ominous upward trend. A decade ago the top individual income tax bracket decreed by the solons of Sacramento was 9.3%; today, it’s 13.3%. The nice pensions for state and local workers in California are $189 billion short of adequate funding, according to an analysis by Moody’s. That pension debt comes to $13,500 for every private-sector job.

An employer would find Florida more hospitable. Per employee, the burden of unfunded pensions there is only one-fifth as high. The Tax Foundation calculates that Florida’s tax collections amount to 9.2% of the state’s economic output, versus California’s 11.4%. The Florida Feedme Ratio is only 69.

Did you get a job offer in California? Pause before taking it. When you buy a house there, you are incurring your share of the state’s obligations. You cannot walk away from them. In effect, you don’t really own that house. The state pension fund owns it. You are just a junior partner in the arrangement.

Years from now you may look for an escape. You may head for low-tax Florida. But potential buyers will be stepping into your shoes and will price their bids accordingly.

The information about takers vs. makers is important information and will determine the economic future of different states.