When I attended UCLA it was a multi-racial, multi-ethnic and multi-cultural campus. There were students from nearly every country, every religion and all races. Yet, most students thought of themselves as Bruins and as Americans. We were all graduated in a single commencement ceremony which made us feel we were all part of a single community

John Leo, in the City Journal, writes an article entitled, Let the segregation commence, in which he describes the various commencement ceremonies at UCLA.

Planning was easier before a new crop of ethnic groups pushed for inclusion. Students of Asian heritage were once content with the Asian-Pacific Islanders ceremony. But now there are separate Filipino and Vietnamese commencements, and some talk of a Cambodian one in the future. Years ago, UCLA sponsored an Iranian graduation, but the school’s commencement office couldn’t tell me if the event was still around. The entire Middle East may yet be a fertile source for UCLA commencements.”

I think this multi-cultural separatism is bad for America. Before multi-culturism became popular in the 1960’s, the objective of schools was to cause everyone to assimilate into the American culture. Children pledged allegiance to the Flag, sang America the Beautiful and the Star Spangled Banner, learned that the Founders of our country were ordinary men with extraordinary ideas, and were taught that America provides freedom and opportunity that isn’t available elsewhere. Children were taught what it was to be an American and to be glad that they were part of this great country. It was considered important to make sure that children, regardless of where they came from, or what race they were, became assimilated so that they were able to take advantage of the opportunities available to them in this great country.

Since “Multi-culturism” became fashionable, schools, rather than assimilating children into the American mainstream, have been causing children to celebrate their differences. Celebrating differences has the opposite effect. Children feel alienated from the main culture, and feel more of an attachment to their ethnic or racial group. Rather than assimilating children into the American culture, multi-culturism has caused them to feel apart from the American culture. That is particularly true among the Muslim community, but extends to the Latino and African-American communities as well.

“But the core reason for separatist graduations is the obvious one: on campus, assimilation is a hostile force, the domestic version of American imperialism. On many campuses, identity-group training begins with separate freshman orientation programs for nonwhites, who arrive earlier and are encouraged to bond before the first Caucasian freshmen arrive. Some schools have separate orientations for gays as well. Administrations tend to foster separatism by arguing that bias is everywhere, justifying double standards that favor identity groups.

Four years ago Ward Connerly, then a regent of the University of California, tried to pass a resolution to stop funding of ethnic graduations and gay freshman orientations. He changed his mind and asked to withdraw his proposal, but the Regents wanted to vote on it and defeated it in committee 6-3.

No major objections to ethnic graduations have emerged since. As in so many areas of American life, the preposterous is now normal.”

In my view, this does not portend well for the future of America.
____

I rarely post in full an article from another blog. This article by Gary Gross on The California Conservative is so on point that I felt it should be restated.

I just finished posting something that illustrates Harry Reid’s and Nancy Pelosi’s diminutive and shrinking credibility here. Now I’m writing another article that illustrates President Bush’s non-existent credibility on immigration reform. I’m basing this post on Thomas Lifson’s op-ed, which is posted on RealClearPolitics. Here’s the first section of Mr. Lifson’s op-ed that jumped out at me:

President Bush is threatening to revive the failed comprehensive immigration bill in “improved” form. He is wasting his and our time. No amount of improving can make the comprehensive approach the best path for America to solve its immigration woes. Instead of a big bang approach to immigration reform, we need to adopt a different sort of change strategy for America, a step-by-step, or iterative approach, learning as we go, passing reforms in a logical sequence, and learning from mistakes along the way.

It saddens me to think that this immigration bill’s most vocal supporters are bent on not taking this issue seriously. My disappointment on their lack of seriousness is only exceeded by my disappointment at their thinking that they know best and their acting like they have a shred of credibility left on the issue of enforcing immigration laws. Here’s Mr. Lifson’s quote that most jumps out at me:

The politicians do not seem to realize how completely they have lost the confidence of the American people when it comes to stemming the flow of illegals across the border.

That statement is spot on. Frankly, I’m not certain that they even care that they don’t have a shred of credibility left. This, I’m afraid, points to another trend that I think will play out during next year’s campaign.

The trend that I’m noticing is an anti-Washington wave building. This week’s polls that showed Harry Reid’s JA approval rating at 19 percent illustrates that point. The fact that President Bush’s JA rating is in the low 30’s is more proof that his policies aren’t well-liked. The fact that Congress’ JA rating is 5 points lower than President Bush’s rating tells me that people see Washington insiders like Trent Lott, Ted Kennedy and John McCain as not worthy of their trust.

Once the trust between politicians and the American people is broken, it’s finished. I’m convinced that that’s why activists’ reactions to this ugly compromise is seen in such a negative light. Polls show that that intensity isn’t exclusive to Republican activists or Democrat activists. The intensity is high and it’s coming from both sides of the aisle.

I’d also believe that Republicans will gain from this national mood if they show that they’re serious about reforms throughout the political system. Here’s how I can see that scenario playing out: I can picture Jon Bruning defeating Chuck Hagel in the GOP primary in Nebraska. Based on this report, I can also picture Lindsey Graham getting beaten in South Carolina:

People are talking about newly elected State Treasurer Thomas Ravenel, son of the legendary “Cousin Arthur” Ravenel who represented the 1st CD in Congress for a decade, then came home and ran again for State Senate, from where he sought and found the funds for the new Cooper River bridge which not coincidentally now bears his name, challenging Graham in the primaries next year.I don’t know how Graham is holding on in his upstate base (a very conservative area), but Ravenel would run up large majorities in the Low country and Grand Strand. His father is perhaps the most beloved politician in the state, and he is an attractive and conservative candidate.

Based on what I’ve read about Bruning and based on this information, I think that it’s quite possible to knock off both Hagel and Graham in the primaries and to have Bruning and Ravenel keep those seats in GOP hands in the general election. Defeating Sens. Hagel and Graham would send a definitive message to wobblies throughout the GOP. Equally important is the fact that it’d send the message to voters that we’re serious about cleaning up our image with actions and that we’re serious about doing what’s right for the American people.

If those things happen, the GOP will be (a) charting a new course for America and (b) giving people a reason to trust them on a variety of issues, including the GWOT and immigration.

I came across this article today about France – yes, France, getting tough on illegal immigrants. I decided not to make any editorial comment. The article speaks for itself.

Brice Hortefeux, who heads the newly created Ministry of Immigration, Integration, National Identity and Co-Development, said a monthly quota also would be set for ferreting out those employed in France illegally.

In a meeting with security officials, Hortefeux reiterated President Nicolas Sarkozy’s goal of 25,000 expulsions by the end of 2007 – compared with 24,000 in 2006 – and set a year-end goal of 125,000 arrests for alleged illegal entry or illegal residence, a ministry statement said. The number of those already arrested was not immediately clear.

Sarkozy, who was elected May 6, pledged during his campaign to create a ministry of immigration and national identity to rein in the flow of migrants and ensure they are integrated into French society. Riots in French housing projects in 2005 were largely driven by anger among children of immigrants at persistent discrimination and a feeling of alienation from mainstream society.

Hortefeux said the new measures were aimed at “dismantling networks that exploit the misery of illegal immigrants,” the statement said.

His orders came after he and Prime Minister Francois Fillon visited a holding center for illegal immigrants Monday _ and three days after the bodies of 18 illegal immigrants were fished from the Mediterranean by the crew of a French frigate.

The dead _ 12 men, two adolescent boys and four women _ were believed to be seeking new lives in Europe, though it was not clear what country they were coming from. They will be buried in France.

“The French Republic will be extremely firm. It will ensure laws are applied,” Fillon said, adding: “Naturally, these laws must be applied with the greatest humanity.”

Many saw Sarkozy’s proposal as a nod to the electorate on the extreme right, which long has made fighting immigration one of its main causes.

Hortefeux, in his meeting with security officials, also insisted on the need to develop a system of paying illegal immigrants to voluntarily return home, setting the number of paid departures at 2,500 for this year _ a 25 percent increase from 2006.

Those volunteering to leave, as part of a program started in late 2005, are given a fixed sum of money, normally $4,700 per couple, with $1,350 each for the first three children. 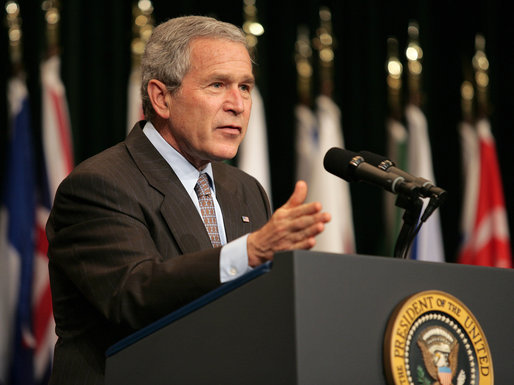 The more I talk to my fellow conservatives and read articles posted by conservatives, it seems to me that there is a revolt brewing within the Republican Party. Conservatives feel that the Administration and the Congress have abandoned them and their concerns.
END_OF_DOCUMENT_TOKEN_TO_BE_REPLACED