Caroline Glick, a reporter at the Jerusalem Post, writing at Townhall.com, tells us about a group of leftist Jews who want to destroy the special relationship that Israel enjoys with the U.S.

US Secretary of State Condoleezza Rice’s speech at the American Task Force for Palestine’s inaugural dinner in Washington on Wednesday evening was but the latest sign that America’s alliance with Israel is weakening.

Rice’s statement that “there could be no greater legacy for America than to help to bring into being a Palestinian state,” just about says it all. The secretary of state of a president who was once friendlier to Israel than any of his predecessors now claims that the establishment of a state for a people who have distinguished themselves as the most overtly pro-jihad, terrorist society in the world, would be the greatest thing American could ever do.

Unfortunately, unless concerted steps are taken by the Israeli government, Israeli citizens and the American Jewish community, the downward trend in relations with the US will only get worse. Perhaps most upsetting is the central role that a tiny minority of American Jews has played in souring ties between Jerusalem and Washington. That minority has undermined support for Israel in the Democratic Party and now seeks to undermine Israel’s position in the US in general.

The Democratic Party’s sharp turn leftward in recent years has been a major factor in weakening the US-Israel alliance. The ideological transformation of the party is the fruit of a collaborative effort by leading financiers, radical-leftist ideologues and political activists. Together these forces built organizations that dictate the party’s agenda; finance the campaigns of politicians who embrace this agenda; and work to defeat conservative Republicans and Democrats who disagree with their agenda. 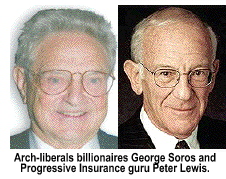 MoveOn.org is the most influential organization of this type established in recent years. Its principal financiers are American Jewish billionaires George Soros and Peter Lewis.

MoveOn.org first gained national prominence during the 2004 Democratic presidential primaries. Howard Dean, a previously undistinguished governor of Vermont, was an eminently forgettable also-ran with a reputation among the few who knew of him as a political moderate who was hawkish on national security. Then he was discovered by MoveOn.org.

As the group began pumping hundreds of thousands of dollars into his campaign,Dean veered to the left and began roundly condemning the war in Iraq. Caught off-balance by Dean’s challenge, all but one of the other candidates shifted left as well and joined him in criticizing the war. For his principled refusal to disavow the war in Iraq, Connecticut Senator Joseph Lieberman earned the enduring enmity of MoveOn.org.

This summer, MoveOn.org played a central role in Lieberman’s defeat in the Democratic primary for his Senate seat. It contributed funds to Lieberman’s opponent, Ned Lamont, and its Web site served as a clearinghouse disseminating anti-Lieberman propaganda.

Propaganda posted on the Web site was laced with blatant anti-Semitic attacks. Postings repeatedly referred to Lieberman as “the Jew Lieberman,” and “ZioNazi Lieberman.” These attacks were by no means unusual. Indeed, anti-Semitic slurs against Israel and Jewish Americans, and belittlements of the Holocaust, appear regularly in MoveOn.org Web forums.

In a representative post, a MoveOn.org member compared President George W. Bush negatively to Adolf Hitler, writing, “Bush is no Hitler. Hitler was a socialist and believed in something beside money. He did not dodge real military service and he believed at least in Germany, which was a real nation and not a corporation like the US. Moreover, Hitler did not use depleted uranium and phosphorous to burn people alive. He did not condone the torture of prisoners ‘for fun’ or ‘to relieve stress.'”

According to a Jewish Telegraphic Agency report, Soros and his wealthy Jewish American friends have now decided to aim their fire directly at Israel. Soros has invited Lewis and other North American Jewish plutocrats like Charles and Edgar Bronfman to join forces with him and leftist Jewish American organizations including American Friends of Peace Now, the Israel Policy Forum, Brit Tzedek v’Shalom, and the Reform movement’s Religious Action Center to form a political lobby that will weaken the influence of the pro-Israel lobby AIPAC.

Many of the individuals and organizations associated with the initiative have actively worked to undermine Israel. Soros caused a storm in 2003 when, during a fund-raising conference for Israel he alleged that Israel was partially responsible for the rise in anti-Semitic violence in Europe because of its harsh response to Palestinian terrorism.

In November 2005, the leaders of the Israel Policy Forum met with Rice and pushed her to dismiss Israel’s legitimate security concerns regarding the operation of the Gaza Strip’s border crossing points at Rafah and Karni. Following their advice, Rice aggressively and publicly pressured Israel to make dangerous concessions to the Palestinians that involved Israel’s relinquishment of effective control over its own borders.

After Israel capitulated to Rice and an agreement was reached, Seymour Reich, one of the founders of the Israel Policy Forum, crowed, “I have no doubt that we bolstered the secretary of state’s instincts and strengthened her opinion that aggressive American involvement was needed to achieve practical results.”

Ahead of then-prime minister Ariel Sharon’s scheduled visit with Bush in the summer of 2003, Edgar Bronfman, president of the World Jewish Congress, wrote a letter to Bush along with former secretary of state Lawrence Eagleburger expressing opposition to the security barrier and asking the president to treat Sharon in the same manner he had treated PA leader Mahmoud Abbas.

Weeks later, Bronfman criticized the Palestinians for not limiting their terrorist assaults to Israeli residents of Judea, Samaria and the Gaza Strip. In a media interview he said, “If the Palestinian suicide bombers only went to the settlements and told the whole world they were wrong, then the whole world would have had a case against Israel and there would be a two-state solution by now. Instead, they sent them into Israel proper, which is ghastly.”

After Hamas’s electoral victory in January, American Friends of Peace Now, Israel Policy Forum and Brit Tzedek v’Shalom came together in an ad-hoc coalition to shield the Hamas-led Palestinian Authority from Congressional sanctions. Together they worked to sink the Palestinian Anti-Terror Act, which enjoyed overwhelming support in the Congress and the Senate and was backed by AIPAC. The legislation was designed to update US policy toward the PA in the wake of Hamas’s ascendance to power.

The bill called for the immediate cessation not only of direct US aid to the PA but also for the cut-off of US assistance to nongovernmental and UN organizations operating in the PA that had connections to terrorist organizations. The bill defined the PA as a terrorist sanctuary and consequently would have barred the entry of PA officials to and the operation of PA offices in the US, and placed travel restrictions on PA and PLO representatives to the UN. The bill also would have prohibited US officials from having any contacts with officials from Hamas, the Aksa Martyrs Brigades, Islamic Jihad and the Popular Front for the Liberation of Palestine.

The bill was approved by an enormous majority in the House of Representatives. Yet, due to the lobbying efforts of this group of Jewish leftists, the Senate version was greatly watered down, and included a presidential waiver that rendered the bill more or less declaratory. Since there was little common ground between the two versions of the bill, the Palestinian Anti-Terror Act was scuttled.

According to the JTA account, Soros would like to institutionalize the ad-hoc coalition’s success in undermining the Palestinian Anti-Terror Act in a new lobby. Its founders all insist that theirs is a pro-Israel group. Yet scrutiny of the groups’ organizational and individual members’ actions leads to the inevitable conclusion that far from acting to promote Israel, this new lobby will work to weaken Israel, to weaken the Israel-American alliance and to strengthen Israel’s enemies. While its Jewish founders insist that they are pro-Israel, the fact of the matter is that they are about to establish an American Jewish anti-Israel lobby.

BUT FOR all that, it is not too late to change course. The Jewish American anti-Israel lobby is scheduled to be launched on October 26. Now is the time for the Olmert government to forthrightly announce that the new lobby is not pro-Israel, but rather anti-Israel.

Even if the government does no such thing, Israel’s citizens have a responsibility to explain to the organized American Jewish community and to its umbrella organization, the Conference of Presidents of Major American Jewish Organizations, that we, the citizens of the largest Jewish community in the world, view these groups as anti-Zionist. Israeli citizens should request an explanation for the inclusion of some of these groups in pro-Israel umbrella organizations like the Conference of Presidents when their goal is to weaken Israel, to weaken Israel’s alliance with the US and to strengthen Israel’s enemies. Israeli citizens can and should send letters and e-mails to this effect to the Conference at its New York offices.

One of the great strengths of the American Jewish community is its pluralism. On a religious level, all communities – from the ultra-Orthodox to the ultra-Reform – are recognized as Jewish communities. But there is a line that everyone knows may not be crossed. Jews for Jesus have removed themselves from the Jewish people and everyone knows this. There is not one Jewish organization that accepts them as Jews.

By the same token, the vast majority of American Jews support Israel. As is the case with religious observance, this support runs the gamut from disciples of Meir Kahane to followers of Yossi Sarid. But everyone knows that organizations like Not in My Name, which acts as the Jewish American branch of the International Solidarity Movement, seeks to undermine IDF operations and makes common cause with Israel’s enemies, are not Zionist organizations.

Like Jews for Jesus, Jews who work to weaken Israel’s security, undermine Israel’s relations with the US and strengthen Israel’s enemies take themselves beyond the broad tent of the American Jewish pro-Israel community.

Israel’s alliance with the US is based on the fact that most Americans support Israel. American support for Israel finds its roots in foundations as diverse as religion, politics, morality, security, culture and economics. While the alliance is visibly weakened, its foundations remain solid. To rebuild American political support for Israel and to enhance the US-Israel alliance, it is imperative that Israel be capable of understanding the nature of this support. This understanding begins by making distinctions between our many friends and our foes and acting on these distinctions. Not all of our friends are Jews and not all Jews are our friends.

These leftist Jews from the Democratic Party such as George Soros, Peter Lewis, the Bronfmans, Semour Reich, Howard Dean and others, are in the process of forming an organization to undermine the support of Israel. American Jews – wake up! The anti-semitism of the 21st Century is coming from the left not the right. The support of Israel by the United States will be considerably weakened by these self-hating leftist Jewish organizations like MoveOn.org, Peace Now, Israel Policy Forum and others. These groups purport to be pro-Israel, but they are clearly not.

American and Israeli Jews need to oppose these movements that want to destroy the relationship between the United States and its ally, Israel.

2 thoughts on “The Jewish-American Anti-Israel Lobby”